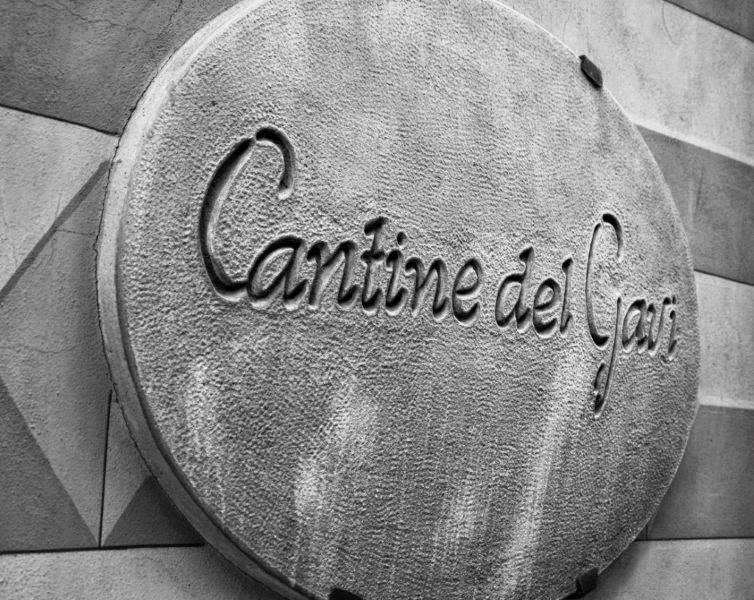 Writing about Alberto Rocchi, Alberto Rocchi, the king of Gavi-style risotto, was not easy.
However, describing his dishes and reviewing his restaurant is, given its 40-year history as one of the most celebrated purveyors of traditional Piedmont cuisine in Italy and across the globe.
When someone says Gavi, you immediately think of his restaurant “Cantine.

I had to let my encounter with Alberto Rocchi marinate for quite awhile and what stuck with me, what has been echoing in my ears for some time is his statement:
“We need less passion and more professionalism nowadays.”
Then, boom!!! It blew me away.
And, I realized, he was right.
Passion is not enough and professionalism is key. 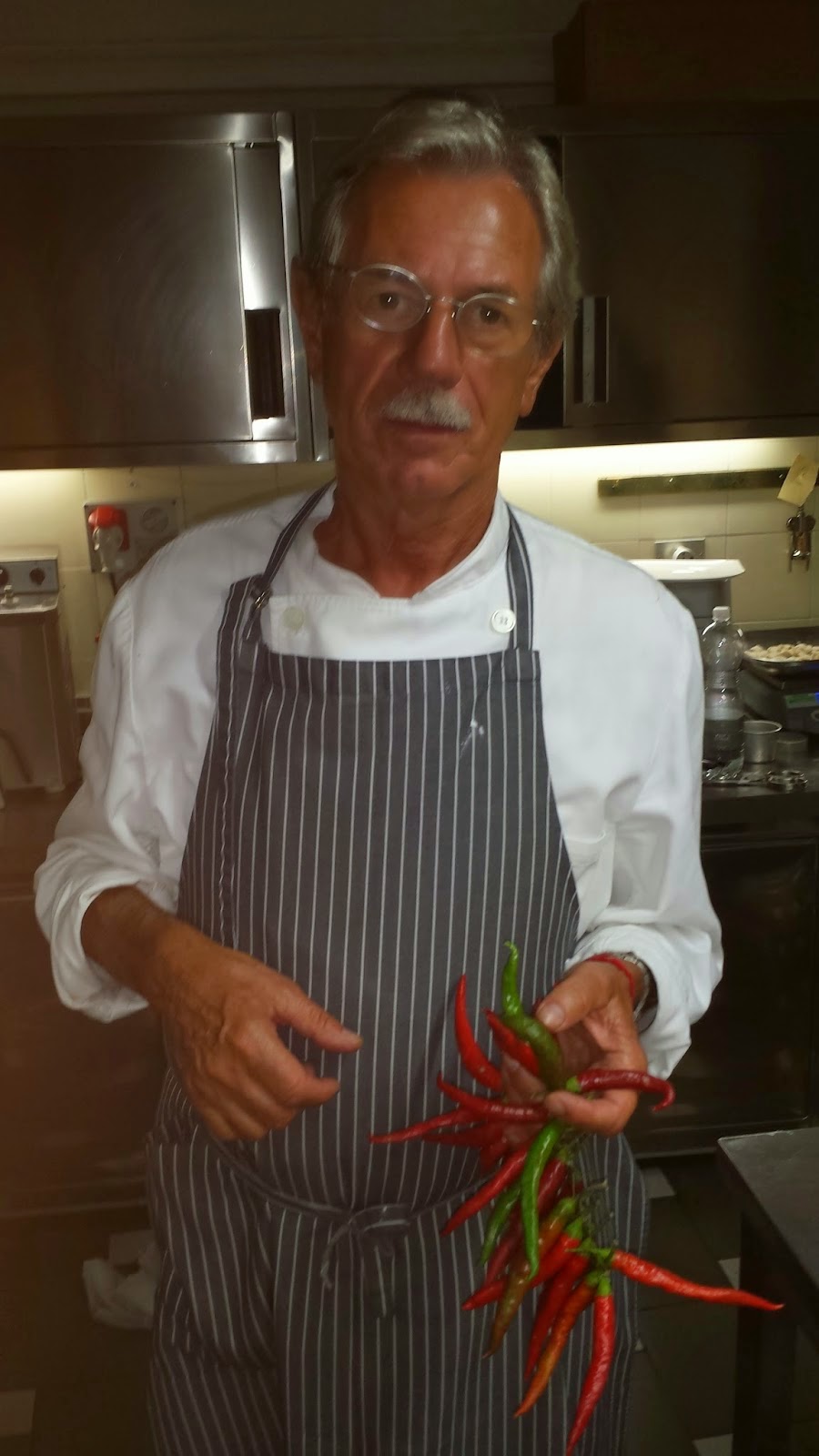 A man of few words, ‘to the point’ like his presentation, straightforward, uncomplicated and classic like his dishes.
Not too pretentious yet polished, with well-defined and well-balanced flavors like his risotto.
Naturally, because Alberto Rocchi is the ‘father’ of risotto al Gavi, after all.
A chef by necessity, sommelier by preference and Romagnol man by origin, he moved to Gavi more than forty years ago and started cooking with Mama Tebe in this kitchen.
A kitchen that he has had a hard time leaving behind, although he handed over the reins to Roberta and Elisa more than ten years ago.

The secret to his success?
“It has nothing to do with success," he said, almost as if wanting to distance himself from a glitzy TV world that really isn’t his style, “this is hard work, it’s physically very tiring and requires constant dedication and sourcing.
We have customers that have been coming here for years because they know we use ingredients from the best suppliers and we have built trusting relationships with those suppliers over the years, making us confident that we’re using the highest quality ingredients.
Not only do I want the best for my customers, I myself would never use something that I don’t believe in," adding "my kitchen crew is key and my kids are sharp.”

Having lunch with Alberto Rocchi left me somewhat awestruck, as he scrutinized each dish we were served with a searing, rigorous onceover.
He picked up a breadstick, leaned in towards me so that no one could hear him, looked at his plate and said: “My daughters are really fantastic. But, I don’t ever tell them and they don’t ever need to hear it. Roberta made that. She analyzes everything and experiments until she gets it just right because she’s a perfectionist and pulls off dishes that you could never imagine. And, my other daughter, Elisa, I don’t know how she gets all the pasta and desserts made. There’s so much going on back there and those two - pointing at the kitchen - are like steamrollers when it comes to getting it all done…it’s hard to work with them,” he said happily, smiling.

How has your cooking changed over the years?
“When I said it was hard work, that’s the truth. Back in my day, cooking to order was impossible because we didn’t have the equipment we have today. We had fuel oil stoves with no exhaust hoods and when you finished the service and left the kitchen, you were completely exhausted.
Fortunately, we now have new technology, which is a big help and allows you to cook to order.”

What about the style of your chefs?
“Every one does what they think they’re best at and what they think is good for their job.
Personally, I don’t really like food that’s been touched by too many hands.
I’m of the old school and, if someone comes to eat at our restaurant, they come for the Rocchi family, not anyone else. Even if we don’t always go out into the dining room, we’re always in the kitchen.”

How did you get your passion for cooking? (oops, I used the word passion!)
“I have never cooked out of passion, only out of necessity. I’ve never set foot in any other kitchen but my own and I’ve always made simple dishes, those that I was familiar with and that continue to be our forte today.
Cooking is the latest thing today and everyone now thinks they're chefs.
These days, we need less amateurs and more professionals.”
I think sitting down and chatting with me at the table was truly distressful for him and being in the dining room without his apron to shield him was even moreso.
So, I stayed in my place, stuck to my interview questions and then, at one point, things took a dramatic turn. Out of nowhere, he opened his mouth as if he had something he absolutely had to say to whoever would listen. 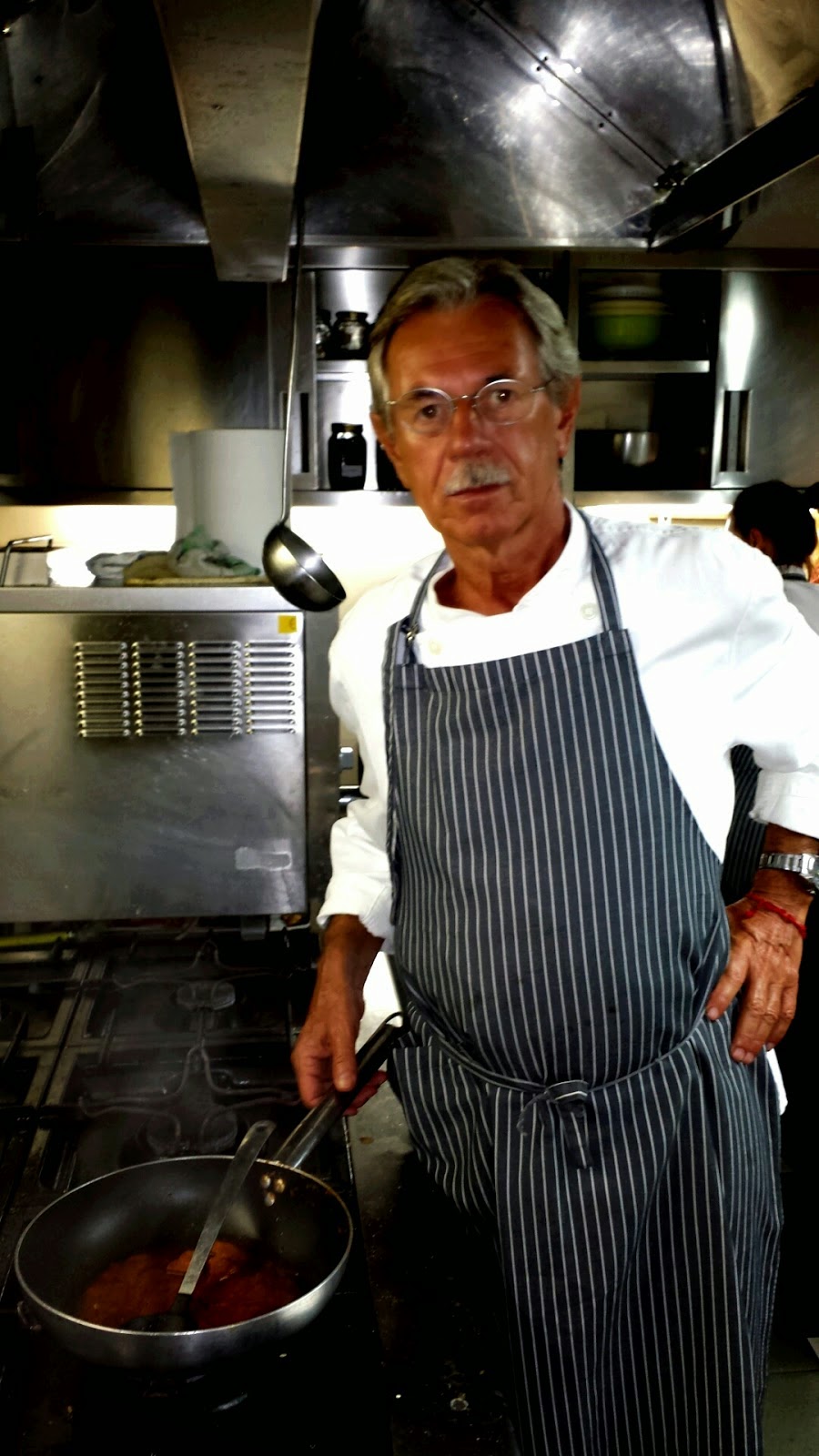 Confiding, confronting and verbalizing something you don’t ever talk about to someone you don’t know that's sitting right there beside you is really easy to do.
It’s a little like travelling in a train.
You sit down and the person next to you starts telling you his story.
The train pulls into the station and he gets off the train, taking that life story with him.
He just leaves and goes on about his business.
And, that’s exactly what Alberto Rocchi did.
He very gallantly lowered his voice and told me something more, something that perhaps gentlemen of his and my father’s generation aren’t used to talking about.
He told me all about his wife, daughters and grandchildren.
What we talked about stays between us.
Those occasions when men of his stature open up are rare and sacred, they must be honored and considered tokens of the great amount of trust they’ve placed in you.
However, to borrow his words, I can assure you that love, satisfaction and a lot of pride have all been the story of his life.

If you’d like to try fresh and seasonal Piedmont cuisine, enjoy a warm welcome in elegant surroundings that are sophisticated yet friendly and, more importantly, if you’d like to find out more about some very special people, visit Ristorante Cantine del Gavi.

Message for Chef Rocchi: “Dear Chef Rocchi, I’m telling you and perhaps others, like my own kids and your daughters as well…that you should tell your kids how wonderful they are every once in awhile because it will encourage them and help them to believe in themselves.
Don’t overdo it, of course, because they’re not used to getting your approval but a ‘well done’ from you, their role models and heroes, would thrill them.”


Tell your daughters they’re fantastic when they deserve it, Chef Rocchi, because they truly are.